Aim: The aim of this paper was to test and analyze the effect of five-week and ten-week shock wave therapy on the reduction of pain intensity in men with lateral epicondylitis, who played tennis recreationally.

Materials and methods: The study included 21 male patients, aged 22 – 65 years (x̄ ± sd, 41.7 ± 10.5 years), with the diagnosis of chronic lateral epicondylitis, without calcifications, which had been established with a clinical and ultrasound examination. The subjects were divided into two groups, according to age: the younger group (≤ 40 years) and the older group (> 40 years). Once in seven days, all the patients were treated with shock wave therapy, which was applied with a focused probe (frequency of 10 Hz; 1,600 shocks; pressure at 1.6 bars). The patients had a total of ten therapies. The intensity of pain was determined with the visual analog scale (VAS) for pain. The assessment of pain intensity with the visual analog scale (VAS) was performed before the start of therapy, as well as after five and after ten applications of shock wave therapy, i.e. after five and ten weeks of therapy application.

Results: In men with chronic lateral epicondylitis, a statistically significant decrease in pain intensity occurred on the VAS scale (p < 0.001), during the observation period of then weeks. A statistically significant decrease of pain intensity on the VAS scale during the observation period occurred both in patients aged under 40 years (p < 0.001) and in those aged over 40 years (p = 0.001). There was no significant difference in pain intensity between the younger and older men, neither at the beginning of therapy, nor after five and ten shock wave therapy sessions.

Conclusion: To conclude, our results indicate that the application of ten shock wave treatments in men with chronic lateral epicondylitis significantly reduces pain.

Tennis elbow, or lateral epicondylitis, is tendinopathy of the finger extensor muscles. This tendinopathy is most frequently found in tennis players. It was first described by Runge in 1873, and the term tennis elbow was first introduced into terminology by Major in 1883 [1],[2]. He established a link between lateral epicondylitis and the overuse of the extensor digitorum communis muscle, which causes pain when movement is made in the elbow joint. In addition to pain, swelling also occurs at the site where the muscle attaches to the lateral epicondyle. As early as 1936, Trudel et al. gave a detailed description of the clinical picture and pathology of tennis elbow, and this description remains valid to date [3].

There are several options for tennis elbow treatment. If the therapy of choice is local application of combined physical therapy, then the protocol for treating lateral epicondylitis, i.e. tennis elbow is the following: magnetotherapy, medication electrophoresis, laser therapy, transcutaneous electrical nerve stimulation (TENS) applied to the body of the m. extensor digitorum communis [2]. If the physician opts for conservative treatment, this entails resting the arm, application of an orthosis or cast, and taking nonsteroidal antirheumatics, orally. The third, but not necessarily the last option, is surgery or local application of corticosteroid medication, for pain alleviation. None of the described methods of treatment are always effective [4].

Only a few studies have analyzed the effects of this therapy on the pain syndrome in patients with tennis elbow. Some studies have shown that this is a very useful method for reducing pain and that it has a positive therapeutic effect, while other studies have shown that there is no confirmed positive effect on tennis elbow patients [6],[7]. Therefore, the aim of this paper was to investigate the effects of shock wave therapy on pain reduction in men who play tennis recreationally.

This panel study included 21 men, aged 22 – 65 years (x̄ ± sd, 41.7 ± 10.5 years), with the diagnosis of chronic lateral epicondylitis. The study was carried out from June 2019 to March 2020 at the private clinic Physical, in Belgrade, Serbia. The criteria for including subjects in the study were: confirmed diagnosis of chronic lateral epicondylitis, discomfort lasting 3 to 5 months prior to therapy, first-time diagnosis of the said condition, as well as playing tennis recreationally. The criteria for excluding subjects from the study were: use of any therapy, prior surgical procedures, as well as declining to participate in the study. All the patients were right-handed, which is why they had lateral epicondylitis of the right elbow. Lateral epicondylitis was suspected due to pain caused by palpation of the site of attachment of the extensor digitorum muscle to the lateral epicondyle, with the spasm of this muscle and its painful extension. Lateral epicondylitis was diagnosed with ultrasound. None of the patients were diagnosed with calcification. Before the therapy began, each patient had been individually informed about the technique of shock wave therapy and had signed a written consent form.

All patients underwent shock wave therapy applied with the Masterpuls MP -200 device, serial No. BS 2058, manufactured in 2011 (Storz Medical, Switzerland), with a focused probe and the following defined parameters: frequency of 10 Hz, 1,600 shocks, pressure at 1.6 bars. The therapy was applied once a week, and the patients had a total of 10 therapy sessions.

Pain intensity in all patients was determined by means of the visual analog scale (VAS) for pain. The VAS scale for measuring pain intensity is divided into one-centimeter marks, from 0 to 10. The patient indicates, on the scale, the intensity of their pain, whereby 0 signifies the state without pain, while 10 signifies maximum pain. The patients defined the intensity of their pain on the VAS scale at their first visit to the clinic (i.e. at the beginning of the study), as well as after five and ten applications of shock wave therapy. 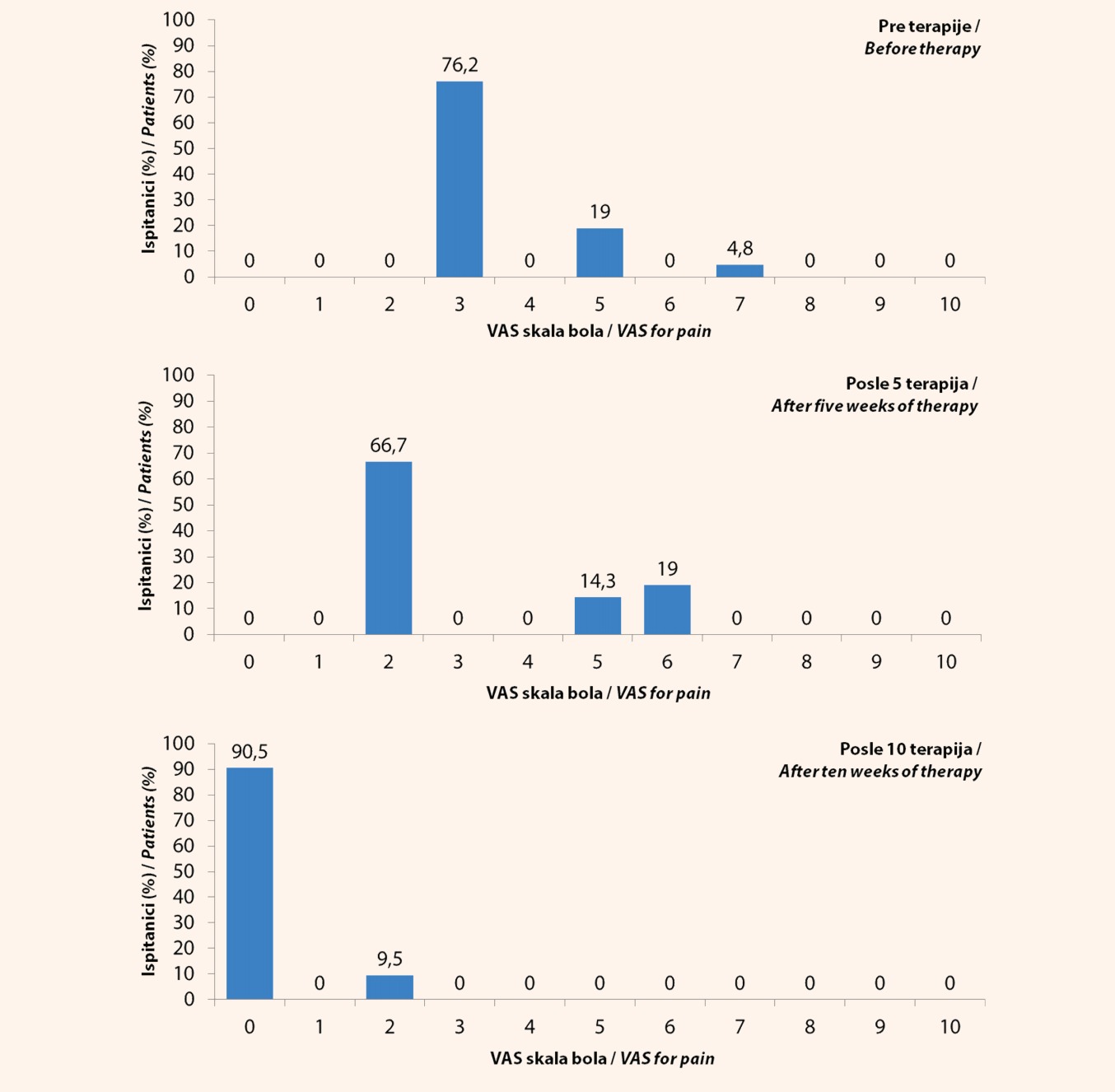 Figure 1. Percentage of men with chronic lateral epicondylitis, by pain intensity, rated on the visual analog scale (VAS), prior to therapy, as well as after five and after ten shock wave treatments.

The median value and the range of the pain intensity rating (minimum – maximum) on the VAS scale, for all the men, prior to therapy, amounted to 3 (3 – 7); after five treatments they amounted to 2 (2 – 6); and after ten therapy sessions, they were 0 (0 – 2). During the observation period, a statistically significant drop of pain intensity rating on the VAS scale (p < 0.001) occurred (Figure 2). In subjects involved in the study, a significant drop in the rating of pain intensity occurred after the tenth therapy session (p < 0.001), but not after the fifth one (p = 0,327).

Figure 2. Median and individual values of the pain intensity ratings on the visual analog scale (VAS), prior to therapy, as well as after five and after ten weeks of shock wave therapy, in men with chronic lateral epicondylitis

A statistically significant drop in the pain intensity ratings on the VAS scale occurred during the observation period of then weeks, both in men under 40 years of age (p < 0.001) and in men over 40 years of age (p = 0.001). There was no statistically significant difference between the younger and the older group of men before therapy, after five, and after ten applications of shock wave therapy (Table 1).

In this study, for the first time in Serbia, we investigated the effect of shock wave therapy on the reduction of pain in men who play tennis recreationally, and we obtained results which indicate a significant reduction in the intensity of pain after ten treatments, i.e. after ten weeks of therapy, in all men, both younger and older, which were included in the study.

It is well documented in literature that extracorporeal shock wave therapy has the following proven effects on tissue: chondroprotective effect, improvement in vascularization, inflammation reduction, and tissue and muscle regeneration [6],[7],[8],[9],[10]. Extracorporeal shock wave therapy acts mechanically at the site of treatment, generating a local thermal effect, which enables the aforementioned biological effects at the site of application [11]. There are numerous mechanisms through which this form of therapy achieves its effects. Haupt et al. demonstrated in 1997 that shock waves bring about positive pressure in the cells, which further leads to absorption, reflection, refraction, and distribution of energy to tissues and cells [7]. Crupnik et al. proved that extracorporeal shock wave therapy causes cavitation and increases the permeability of cell membranes, which brings about the change in the electric potential of the membranes themselves. At the same time, molecules of adenosine triphosphate (ATP) are released [8]. After this, processes that follow cause a change in cell membrane function, which, as a result, bring about the elevation of the calcium level in the cell. The authors have named this phase – the chemical phase. The next phase is the biological phase. It is characterized by cell proliferation, increased synthesis of the endothelial growth factor, and angiogenesis stimulation. Application of this therapy increases the proliferation of T cells and improves the vascularization of muscles [10]. The described processes bring about the healing of wounds [8],[9],[10]. Most studies have proven the effectiveness of this method in treating different sports injuries and pain syndromes [12],[13].

Many authors investigated the effect of this therapy on tennis elbow pain (lateral epicondylitis) [14],[15],[16],[17]. Analysis of available published results in treating lateral epicondylitis with shock wave therapy, applied in keeping with the recommendations of the International Society of Medical Shockwave Treatment (ISMST) and the German-speaking International Association for Extracorporeal Shock Wave Therapy (DIGEST), concluded that this is an applicable and effective method [14]. Namely, Bisset et al. determined through a meta-analysis of available data, that extracorporeal shock waves effectively alleviate pain in lateral epicondylitis, immediately after the first treatment [4]. Krischek et al. demonstrated, applying focused shock waves in tennis elbow treatment, that in acute cases of the condition, positive results can be achieved by the fifth application [5]. Also, a better effect was determined when applying focused ESWT than when radial waves were used. These results have led to the conclusion that ESWT is a superior therapy option in tennis elbow treatment [8]. Our results are in accordance with this large study, since we showed that, in our patients suffering from chronic lateral epicondylitis and treated with mechanical shock waves, a clear reduction of pain occurred after only five applications.

It is indicated, in a large number of studies, that, in patients suffering from tennis elbow, the frequency of shock wave treatment affects the success of the therapy [16],[18],[19],[20]. The result of our study showed that, upon therapy completion, total disappearance of pain occurred in 94,4 % of the patients. These results are consistent with the results of most studies analyzed in the systematic review by Tang et al [19]. However, Rompe et al. showed, on a population of 78 patients suffering from tennis elbow, which was diagnosed with magnetic resonance imaging, that it was only after three months of treatment that patients demonstrated a significant improvement in symptoms [18].

Our results show that the application of ten shock wave treatments in male patients with chronic lateral epicondylitis reduces the intensity of pain, irrespective of their age, and they also indicate that this method can be recommended as a therapy of choice in treating chronic lateral epicondylitis in tennis players. This is a noninvasive and safe method, with practically no contraindications.

7. Haupt G. Use of extracorporeal shock wave in treatment of pseudoarthrosis, tendinopathy and other orthopedic diseases. J Urol. 1997; 158(1): 4-11. [CROSSREF]

7. Haupt G. Use of extracorporeal shock wave in treatment of pseudoarthrosis, tendinopathy and other orthopedic diseases. J Urol. 1997; 158(1): 4-11. [CROSSREF]