Splenectomy is a causal therapy option for adult primary immune thrombocytopenia (ITP), which achieves a long-term good therapeutic response (GTR) in 50- 80% of patients. However, the frequency of postoperative complications, primarily bleeding, infection and thrombosis, is high and ranges up to 30%. Also, the risk of infections, as well as thrombosis (arterial and venous), is increased during the entire life of a splenectomized patient. In the era of new therapeutic drug modalities, such as rituximab and thrombopoietin receptor agonists (TPO-RA), splenectomy is less and less performed. In the available guidelines, there is no clear recommendation on the order of applying second-line therapeutic modalities. Namely, in the second therapeutic line, the 2019 American Society of Hematology guidelines, give preference to rituximab over splenectomy, and TPO-RA over rituximab, but do not give preference to TPO-RA over splenectomy. On the other hand, the 2019 International Working Group for ITP guidelines, do not give preference to any therapeutic modality, including splenectomy. Because of all the above, it is important to determine which patient has a high probability of achieving longterm GTR after splenectomy. Although the results from studies that have analyzed predictive factors for GTR after splenectomy are variable, patient age, preoperative platelet count, and platelet destruction in the spleen (determined by thrombocytokinetic testing) have been identified as predictive in most studies. Today, the use of splenectomy in ITP is considered a good therapeutic option for younger patients without comorbidities, who lead an active life and do not want frequent medical check-ups or are planning a pregnancy, as well as in patients with splenic platelet sequestration.

Splenectomy is one of the oldest forms of treatment for patients with primary immune thrombocytopenia (ITP) [1]. The first splenectomy in a patient with ITP was performed in 1913, and all through to the 1950s it was the only effective therapeutic modality [1]. With the advent of medicamentous therapy, primarily corticosteroids, splenectomy became a second-line and thirdline modality in the treatment of ITP [1].

Splenectomy is currently considered the only causal therapy option for ITP, and it has a dual effect – it simultaneously eliminates the site where thrombocytes opsonized with autoantibodies are destroyed as well as the main site where antiplatelet autoantibodies are synthesized [1]. Consequently, splenectomy is a highly effective therapeutic modality whereby a long-term good therapeutic response (GTR) is achieved in 50% - 80% of patients [1],[2],[3]. However, in the era of new therapeutic modalities, primarily rituximab and thrombopoietin receptor agonists (TPO-RA), splenectomy is performed less and less frequently. In fact, at present, less than 10% of patients with ITP are splenectomized, while 15 – 20 years ago that percentage went up to 60% [4].

The goals of this literature review are focused on highlighting the effectiveness of splenectomy, the frequency of complications for this procedure, the possibility of preoperative prediction of GTR upon splenectomy, as well as on summarizing contemporary recommendations.

THE EFFECTIVENESS OF SPLENECTOMY

A systematic review by Kojouri et al. from 2004, which included patients with ITP, who had undergone either classic or laparoscopic splenectomy, showed that 66% of patients achieved and maintained GTR (1,731 of 2,623 patients in 47 publications), over an average monitoring period of 29 months (scope 1 – 153) [2]. On the other hand, a systematic review by Mikhael et al. from 2009, which included only patients with ITP who had undergone laparoscopic splenectomy, showed the frequency of initial unresponsiveness to splenectomy to be 8.2% (95% CI, 5.4 – 11.0), while the pooled long-term relapse rate was 43.6 per 1,000 patient-years (95% CI, 28.2 – 67.2). The authors concluded that the estimated failure rate for splenectomy, over a five-year monitoring period, was 28%. It is important to note, however, that the relapse rate was significantly higher during the first two years upon splenectomy (92.2%; 95% CI 49.1 – 173.2) as compared to the period from year three to year five (29.2%; 95% CI, 17.3 – 49.0) [3]. The authors of both systematic overviews have stated that the quality level of the papers on splenectomy in ITP is mostly low, primarily due to a short follow-up period, but also because of the application of different criteria for response assessment [2],[3].

Perioperative and postoperative complications of splenectomy are diagnosed in 30% of patients, while mortality ranges from 3 to 17 percent. The most frequent complications are infections, bleeding and a thromboembolic event [1],[2],[3]. In a large American retrospective analysis on 9,976 adult patients with ITP, of whom 1,762 had been splenectomized, the cumulative incidence of abdominal blood vessel thrombosis in the group of splenectomized patients with ITP amounted to 1.6%, as compared to 1% in the group of patients who had not undergone splenectomy [4]. Also, deep vein thrombosis (DVT) in the lower extremities was registered in 4.3% of splenectomized patients as compared to 1.7% of nonsplenectomized patients. As every surgical procedure is a thrombogenic factor, risk analysis was performed separately for “early” (less than 90 days upon splenectomy) and for “late” (more than 90 days upon splenectomy) thromboses. It was determined that splenectomy was a risk factor for the occurrence of “early” (HR 5.4; 95% CI, 2.3 – 12.5) but not for “late” (HR 1.4; 95% CI, 0.9 – 2.6) abdominal thromboses. On the other hand, it was demonstrated that splenectomy posed a risk for the occurrence of both “early” (HR 5.2; 95% CI, 3.2 – 8.5) and “late” (HR 2.7; 95% CI, 1.9 – 3.8) DVTs [4]. Several studies found an increased rate of arterial thromboses in the form of cerebrovascular insult (CVI) and acute myocardial infarction (AMI) in splenectomized patients with ITP [5],[6].

According to a study by Vianelli et al., hemorrhagic complications of splenectomy were registered in 25% of patients during splenectomy, with 8% of these being life-threatening [5].

PREDICTIVE FACTORS FOR THE OUTCOME OF SPLENECTOMY

In literature, so far, at least 25 parameters have been identified as potentially predictive of GTR upon splenectomy [1],[2]. The most commonly analyzed parameters are the following: age, sex, the presence of antiplatelet and antinuclear antibodies, the length of disease prior to splenectomy, response to initial corticosteroid therapy, response to other immunosuppressants, response to intravenous immunoglobulins (IVIg), the number of therapeutic modalities prior to splenectomy, the initial platelet count, platelet count immediately before and after the operation, and the platelet sequestration site [1],[2]. A significant variability amongst studies regarding the criteria for assessing responses to splenectomy, the time of response assessment, and the length of patient follow-up resulted in the variability of the results [1],[2].

Factors that, in most studies, did not prove to be predictive of the success of splenectomy are sex, the presence of antiplatelet antibodies, the length of disease prior to splenectomy, spleen size, and the response to IVIg [1],[2]. On the other hand, in a large number of studies, the following were predictive: patient age, preoperative platelet count, and the site of platelet destruction [1],[2]. The postoperative platelet count proved to be predictive in practically all the studies that analyzed it, but the precise cut-off value was not determined [1],[2].

As opposed to factors predictive of the success of splenectomy, a significantly smaller number of papers analyzed the predictive factors of complications upon splenectomy. Amongst them are the studies by Gonzalez-Porras et al. and Park et al., which determined that age was a factor predictive of the development of all types of complications [7],[8]. In a study by Boyle et al., splenectomy, the male sex, age (over 60 years), more than two comorbidities, and the absence of a stable GTR were predictors of sepsis [3].

For decades, splenectomy was the second-line therapy gold standard for patients with ITP. Its long-term effectiveness was significantly greater than the effectiveness of available drug modalities, such as azathioprine, mycophenolate mofetil, cyclosporine A, cyclophosphamide, danazol, and dapsone (Table 1) [1]. However, with the introduction of new effective drugs, such as rituximab and TPO-RA (eltrombopag, avatrombopag, romiplostim) the situation has significantly changed. Namely, the rate of GTR upon rituximab application is 85% - 90%, and upon TPO-RA application, it is 80 percent [9],[10]. However, after five years of rituximab application, only 20% of patients remain in remission [9]. On the other hand, the effect of TPORA lasts while the drugs are applied. In around 10 – 30% of patients GTR persists after TPO-RA is withdrawn. [10],[11].

The splenectomy site in the contemporary therapeutic algorithm of adult ITP is the object of lively discussion [12],[13]. However, within the recommendations for second-line therapy in persistent or chronic ITP, the American Society of Hematology 2019 guidelines do not give priority to TPO-RA over splenectomy but do prioritize TPO-RA over rituximab. At the same time, these guidelines give priority to rituximab over splenectomy. On the other hand, the 2019 International Working Group for ITP guidelines classified all therapeutic modalities into two categories: surgical (splenectomy) and medical; these were then stratified into the group the robust evidence of effectiveness (rituximab; TPO-RA) and the group with less robust evidence from quality studies (azathioprine, vinca alkaloids, cyclophosphamide, cyclosporine, mycophenolate mofetil [14]. However, these guidelines also do not give precedence to any therapeutic modality, and they do not suggest the order of their application. The most precise recommendation for the order of therapeutic modalities within second-line therapy for ITP was given by the German Working Group for ITP [15]. Namely, regardless of the length of disease, TPO-RA are recommended as second-line therapy, i.e. their application is advised, not only in chronic ITP, but also in acute and persistent ITP resistant to corticosteroids. On the other hand, splenectomy is advised as second-line therapy only in emergencies. These guidelines recommend splenectomy, rituximab, and other immunosuppressants as third-line therapy [15].

Table 1. Good therapy response and the most common side effects in second-line ITP therapy modalities 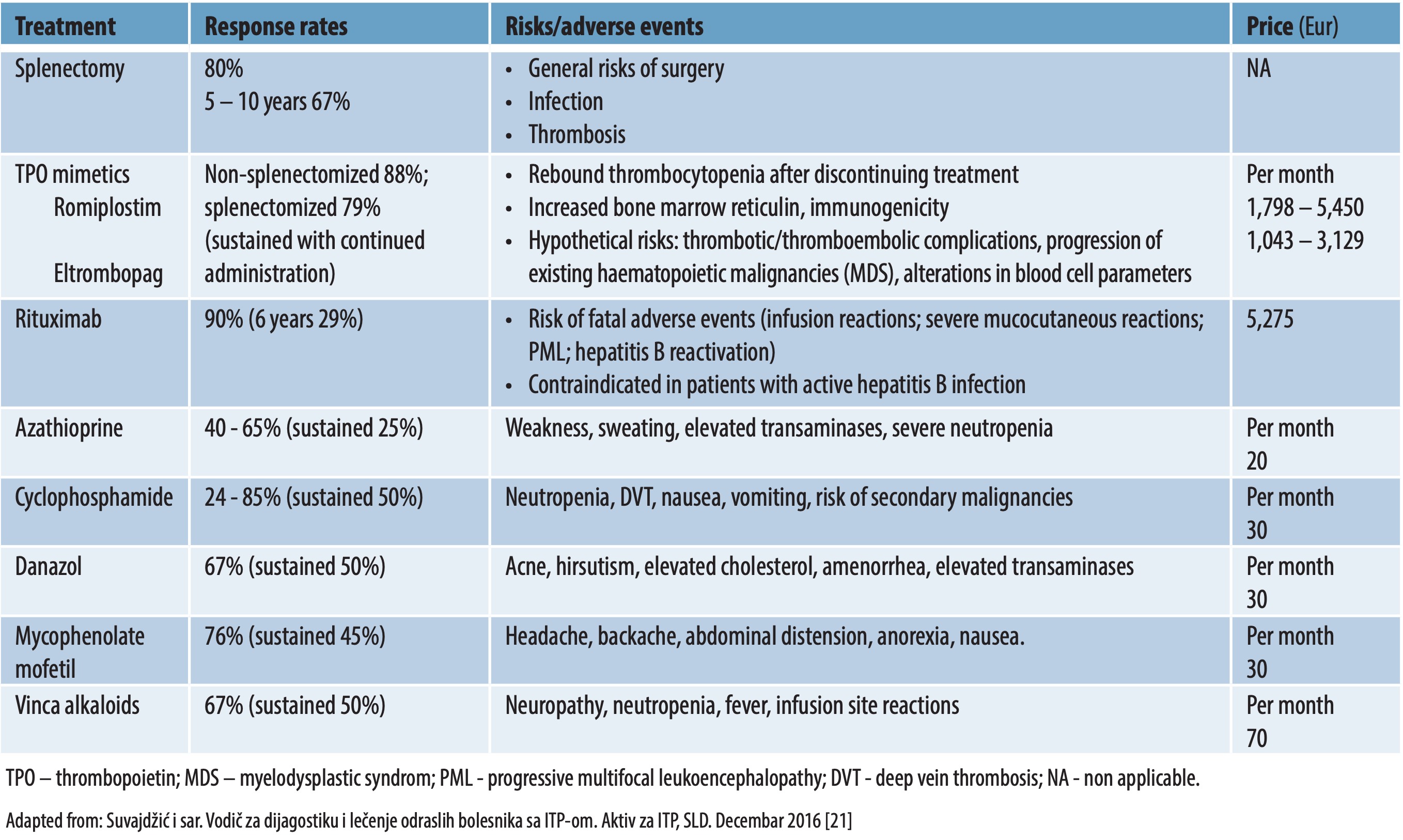 HOW TO CHOSE THE IDEAL CANDIDATE FOR SPLENECTOMY?

Bearing in mind that the order of therapeutic modalities in the treatment of patients with ITP who have not responded to corticosteroids has not been clearly identified, the question arises as to the method of selecting the ideal candidate for splenectomy.

It is recommended to delay splenectomy during the first 12 months upon ITP diagnosis because of the possibility of spontaneous remission which occurs in 10% of patients irrespective of the applied therapy [1]. The advantages of splenectomy are the high rate of long-term GTR and the low cost of the procedure itself [12],[13]. On the other hand, splenectomy is permanent and irreversible, and is followed by life-time risk of complications [12],[13].

The relevant factors that need to be considered when deciding on splenectomy are:

Numerous studies have shown that achieving long-term GTR is better and that complications are less frequent in younger patients [1],[7],[8],[17]. A special subgroup are women in the reproductive period who are planning pregnancy. With the exception of corticosteroids and IVIg, the application of other medication is not recommended in pregnancy, which is why the attitude on recommended splenectomy prior to pregnancy is acceptable [1],[17].

Comorbidities contribute to the development of complications upon splenectomy. The scale developed by the American Society of Anesthesiologists (ASA), which recognizes five categories, is helpful in risk assessment [18]. Namely, in the ASA III group, where comorbidities can most probably affect the outcome of splenectomy and where the expected perioperative mortality is 1.8% - 4.3%, other therapeutic modalities should be considered [18]. Also, patients with high thrombophilic risk, as well as patients with previous thromboses are considered ideal candidates for splenectomy.

3. Patient lifestyle and quality of life

Patients leading an active life who do not want frequent check-ups represent good candidates for splenectomy [1],[17],[19].

The 14 studies published so far, which included 1,114 patients with ITP who had undergone thrombocytokinetic testing, demonstrated the predictiveness of splenic platelet destruction for achieving GTR upon splenectomy in 8 out of 14 studies (63.3%), and for permanent GTR in 7 out of 11 studies (62.5%) [4],[20].

5. Availability of an experienced team

Although there is a tendency to estimate the operation risk through factors related to the patient, the availability of a trained surgical team is an equally important factor. The treatment algorithm for a corticoresistant/corticodependent patient at the Clinic of Hematology of the Clinical Center of Serbia is presented in Figure 1.

In the era of new medicamentous therapeutic modalities, splenectomy is carried out less and less frequently, and it is delayed until all non-surgical treatment options have been exhausted, although there is no generally accepted attitude on the order of applying second-line therapy in adult ITP. However, splenectomy, as a highly effective method, whose complications can most often be mitigated, still has its place in ITP treatment. An ideal candidate for splenectomy is a younger patient without comorbidities, with splenic platelet destruction who has an active lifestyle and does not want frequent check-ups; or it is a female patient planning a pregnancy. At a time when numerous and equally efficient therapeutic modalities are available, the education of the patient and their choice are also crucial factors.